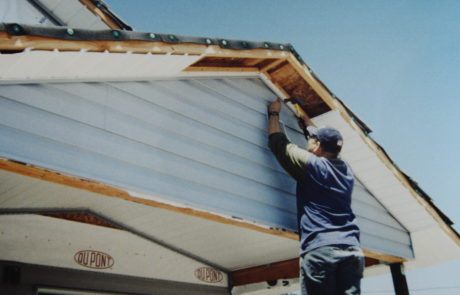 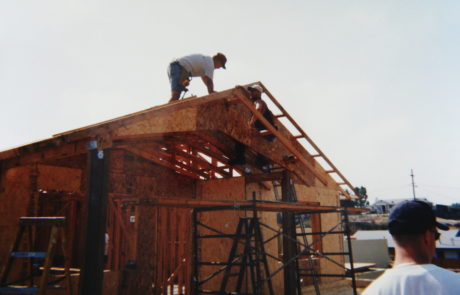 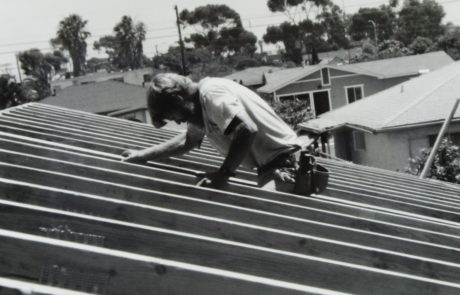 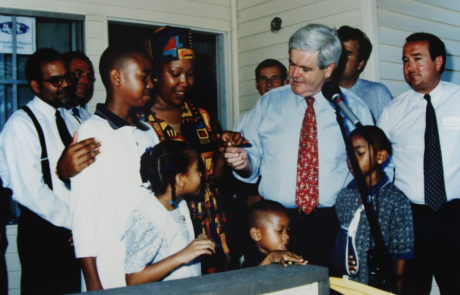 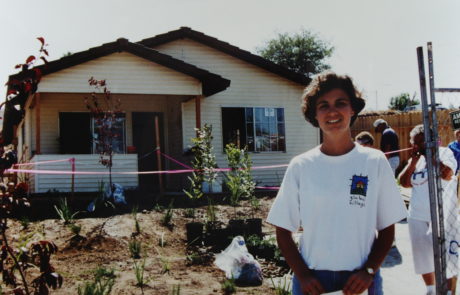 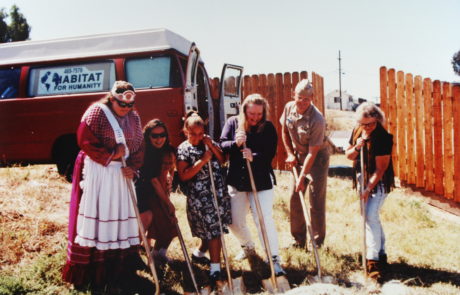 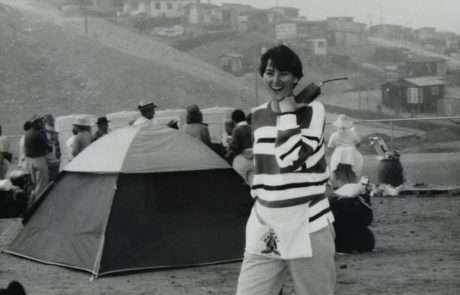 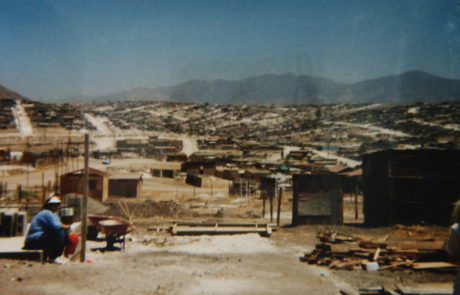 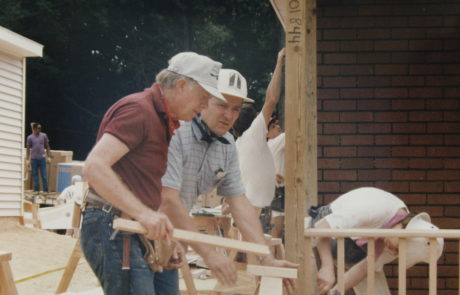 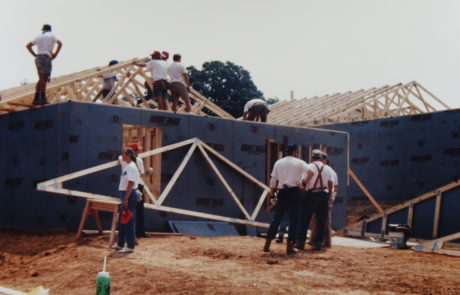 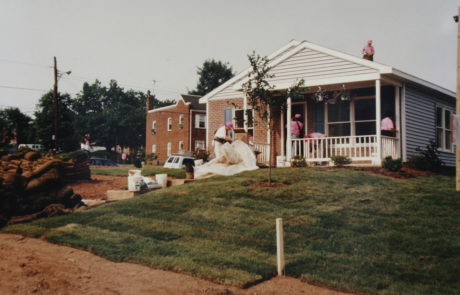 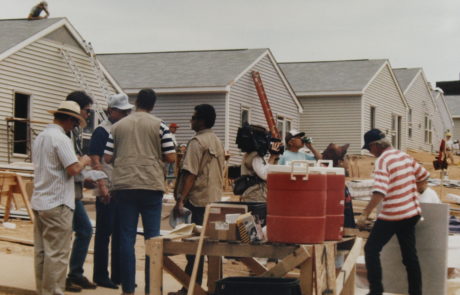 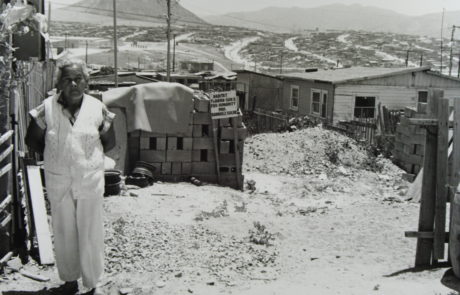 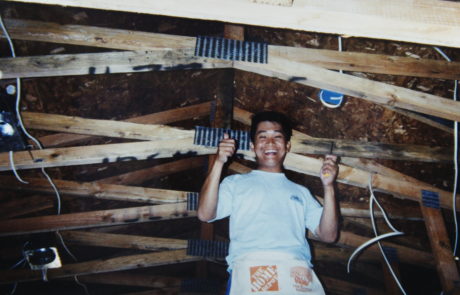 We’ve been been building homes and hope in San Diego since 1988.

Habitat for Humanity was founded on the conviction that everyone should have a simple, decent, and affordable home to live in dignity and safety.

Millard Fuller, the founder of Habitat for Humanity, and his wife, Linda, were devoted to a life of service. They lived for a short period at Koinonia Farms in Georgia, where they were exposed to the ideas that formed the basis of Habitat for Humanity — the idea that self-help, respect, and payback of homebuilding costs with no profit was a way to empower families to improve not only their living conditions, but their entire lives. The Fullers officially formed Habitat for Humanity International in 1976.

San Diegans Dennis and Georgia Briscoe befriended the Fullers and became committed to the Habitat concept. When the adult Sunday school class at First United Methodist Church raised $40,000 to help in 1988, the Briscoes founded the Habitat affiliate in San Diego.

San Diego-Tijuana Habitat for Humanity was originally a cross-border affiliate — the only one of its kind in the history of Habitat. In 1990, President Jimmy Carter and his wife, Rosalyn, came to San Diego to help build homes in Mexico and in the United States for the first ever bi-national Jimmy Carter Work Project, a one-week long blitz style build. The Carters and about 3,000 volunteers built 107 homes in the region during the event — 100 in Tijuana and and seven in Encanto (Southeast San Diego).

By the early 1990’s, Habitat for Humanity International was going strong and took over efforts in Mexico, leaving the San Diego affiliate to focus on building in San Diego County — but not before 358 homes were built across the border.

FROM THEN TO NOW

A lot has changed since the beginnings of San Diego Habitat, but one thing remains true — the philosophy of a community coming together to offer empowering support to our neighbors in need of improved housing.

Habitat for Humanity partners with qualifying families to provide solutions to the housing crisis.

We offer a way for families to own or remain in their homes and focus on the things that matter — like education, health, and family.

A world where everyone has a decent place to live.

Habitat provides three distinct services in the homeownership process: home construction, mortgage financing, and mortgage servicing. And, when Habitat homeowners make payments on their affordable mortgage, they are helping to fund the construction of more Habitat homes.

Identify and acquire land for affordable housing communities, through donation or partnership.

Sell the homes to qualified buyers at a price they can afford, through a long-term mortgage. 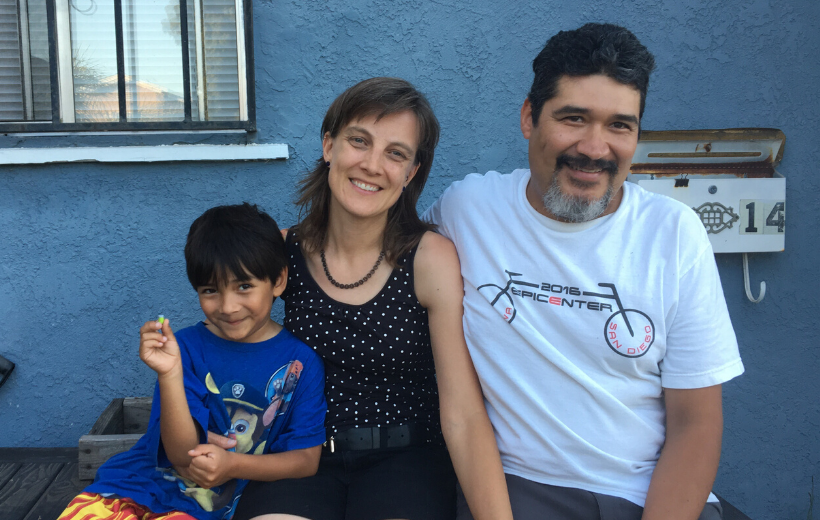 Cesar and Michelle, pictured here with their son Cyrus, purchased their Habitat home in 2018.

San Diego’s high cost of living had Cesar and Michelle believing their dreams of homeownership were unobtainable. Before purchasing their Habitat home, they were discussing the possibility of moving out of state in search of less expensive housing.

“Owning a home will give us better stability to really set down roots and connect more with our community to affect positive change.”

We strive to be transparent in every aspect of our work.

Decent shelter is something we all need to thrive, but there are some common misconceptions about Habitat and affordable housing that can impede our critical work. Who does Habitat help? How does affordable housing affect my neighborhood? Get the facts about who we are and what we do.

Get more Habitat stories delivered straight to your inbox.

Myth: Habitat homes are handouts for the homeless.

Habitat offers a hand up, not a handout. The homeowners who purchase Habitat homes have proven their ability to pay rent consistently in another location. They meet other financial qualifications and put in 250 hours of “sweat equity” which involves working alongside volunteers building Habitat homes, in Habitat’s administrative office, or in the ReStore, and attending finance and homeownership classes.

Myth: The only way to volunteer is at a build site.

We welcome volunteers who perform a variety of tasks. Volunteering at a build site is just one way to help. You can also volunteer at one of our ReStores, in our administrative offices, helping to make events happen, or as an advocate for policy change to improve affordable housing. It’s entirely possible to be a volunteer at San Diego Habitat without ever stepping foot on a build site.

San Diego Habitat gratefully accepts monetary donations, but we also accept donations of building supplies, property, and cars. We sell donated building supplies in our ReStores, where proceeds benefit the families served by the organization. Depending on the location, property can become a build site or be sold. Cars are sold, with the proceeds going to San Diego Habitat.

SEE MORE WAYS TO GIVE ➜

We certainly build new homes in partnership with future homeowners, but we also preserve existing homes in urban neighborhoods to create safe, healthy spaces for existing homeowners who struggle to maintain their houses. We also have the privilege of working with local veterans – providing critical home repair and home preservation on their homes as well. Sometimes, we even get to partner with other community organizations to perform community enhancement projects like park improvements, or community center repairs. All of these efforts, together, help build stronger neighborhoods.

LEARN MORE ABOUT WHAT WE DO ➜

Myth: Donations made to Habitat International are used for local homebuilding efforts.

This is a common misconception. Dollars donated to the national headquarters are divided between overhead costs and housing initiatives in other countries. The best way to make your donation go further in San Diego is to donate directly to San Diego Habitat for Humanity.

Affordable housing actually enhances local tax revenues. By improving or replacing substandard housing, affordable housing becomes a net plus on the tax rolls. Instead of low or no payment of taxes by distressed properties, affordable housing owners actively contribute to the local economy in the taxes they pay, the money they spend in local businesses, and through increased property values in a neighborhood.

And people who live in affordable housing own fewer cars and drive less. According to the National Personal Transportation Survey, low-income earning households make 40 percent fewer trips than other households.

Myth: The market will provide safe, decent, affordable housing on its own.

The cause of the affordable housing crisis in California is based on a simple economic premise. There is an imbalance between supply and demand. A result of strong economic growth over the past few years has created jobs (which increases demand for housing) but insufficient construction of new housing units means that we are not producing enough supply to meet that demand, driving up costs. Habitat is hard at work, not only building homes to help meet the demand for housing, but also advocating for policy change at the local, state, and federal levels that will allow us and other housing developers to streamline and speed up development to meet demand.

We stand for shelter, stability, strength, action, and self-reliance.

learn about our values